After eyeing it for a while I finally decided to buy Advanced .NET Debugging by Mario Hewardt. I’ve been studying WinDbg for some time and consider myself somewhere between beginner and intermediate level. To my dismay I got stuck on the first excercise! Luckily I didn’t give up and finally stumbled on a blog post that unblocked me. This series has for goal to make Advanced .NET Debugging more accessible to people - quite like me - that haven’t grasped all the concepts yet.

In the section Loading Native Images, Mario explains how Windows is loading a native image using Notepad.exe (%SystemRoot%\notepad.exe) as an example. As the first step, Mario instructs the reader to:

The book was written a few years ago and back then Mario was running Windows Vista (most likely in 32-bit too). If you look at the same file offset in Windows 10 64-bit you’ll be disapointed: 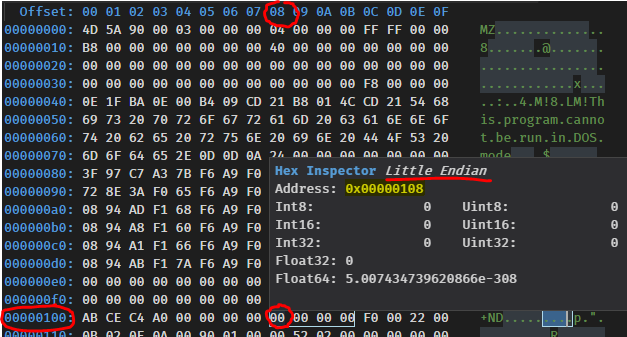 OK, there are quite a few things to unpack in this screenshot.

Each white cell represents a byte. A byte has 256 different values (from 0 to 255). If we want to represent the value 255 in base 2 (binary), we would need 8 characters: 11111111. The same value in base 10 (decimal) still requires 3 characters: 255. In base 16 (hexadecimal) we only need 2 characters: FF. Hence hexadecimal strikes a good balance between brevity and not being too remote from the decimal base we human-beings use. You can use the Windows 10 calculator in Programmer mode to convert between hexadecimal and decimal: 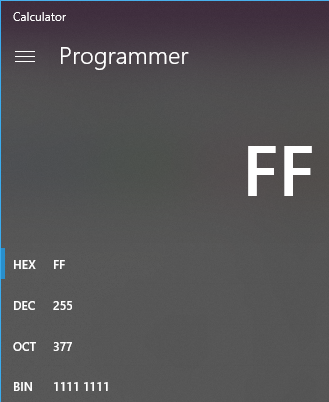 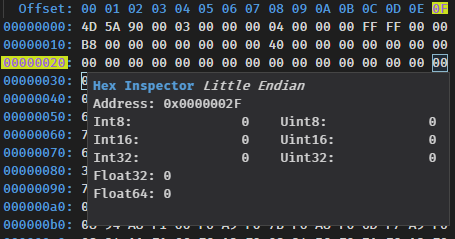 Windows is a little-endian system. This means than the least significant bytes will appear before the most significant ones. So if you were to find the following value: E0 93 01 00, the address would be 00 01 93 E0 - only the byte order is inverted, not the order within a byte - which would commonly be written as 0x193E0 (0x denotes a hex notation and the leading 0s are dropped as they are not significant).

Figuring out the file offset of AddressOfEntryPoint

Now that we know how to read the hex dump, we’re still left with the same problem: there is no address where it’s supposed to be. This is when I started to browse the Internet trying to understand where AddressOfEntryPoint was supposed to be located. My quest initially took me to the PE Format specification, after reading it for a while I ended up being more confused than I initially was. The situation was dire and I needed some hope, and hope did appear in the person of Simon Cooper and his brilliant post Anatomy of a .NET Assembly – PE Headers. This illustration details the required steps to find the value of the AddressOfEntryPoint: 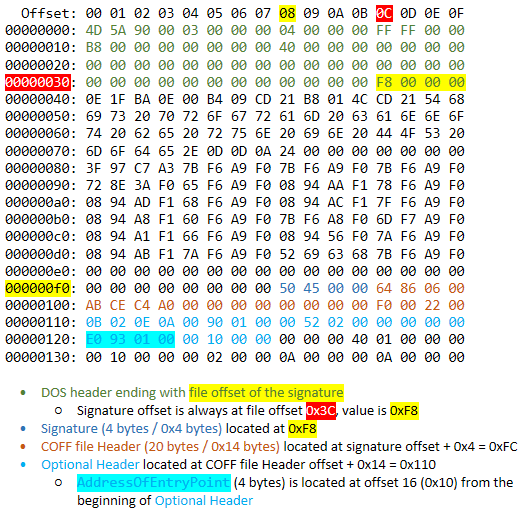 If we look back at the screenshot above we can see than the signature file offset was 0xF8. Hence 0xF8 + 0x28 = 0x120, which is exactly what we found without using the formula.

But we’re now faced with another issue, the address entry point (0x193E0) resolves to some kind of wasteland:

The Portable Executable format has the concept of Relative Virtual Address (RVA) which it defines like this:

In an image file, the address of an item after it is loaded into memory, with the base address of the image file subtracted from it.

As it turns out the AddressOfEntryPoint is not a file offset, it is actually a RVA.

So we need to load Notepad in memory which equates to running it. But we also need to be able to see the base address of the image which is not something than the Task Manager or any other basic tool will be able to provide us. To see this value we need a debugger. Open Notepad.exe (%SystemRoot%\notepad.exe) using WinDbg Preview:

Armed with this information we’ll be able to look at the instructions located at the RVA 0x193E0 by using the Unassemble command:

I hope this post clarified how to find the entry point of a native Windows executable.