30th of Jan 2022: Many .NET open-source have now migrated to GitHub Actions. I hence decided to include it in this post.

25th of Sep 2021: I decided to remove Travis CI from this post. Travis CI recently poorly handled a security vulnerability and security is of paramount importance when it comes to build systems.

5th of Jan 2019: a lot has been happening since I initially wrote this post. Azure DevOps released a free tier for open source projects, the Cake and GitVersion contributors have been hard at work to take advantage of the latest features of .NET Core. So many things have changed that I decided to update this post to reflect the current state of affairs (inclusion of Azure DevOps, upgrade to .NET Core 2.2, utilisation of .NET Core global tools and removing the Mono requirement on Unix platforms).

As a developer I’m amazed by the number of free tools and services available. I wanted to create an end-to-end demo of a CI/CD pipeline that would include:

For my purpose I wanted anonymous users to have access to a read-only view. AppVeyor and GitHub Actions are the most popular choices for .NET open-source projects. CircleCI seems to have dropped in popularity. Azure DevOps released (and then unreleased) a free and unlimited plan for open source projects. As I had both CircleCI and Azure DevOps working, I decided to keep them. In this post I’ll be leveraging the four platforms so that I can highlight their pros and cons.

The code is hosted on the GitHub repository Cake build and is using Cake as its build system.

AppVeyor, Azure DevOps, CircleCI and GitHub Actions all use YAML configuration files. This means that your build steps are living in the same space than your code and this presents several benefits:

The YAML files are:

The project is useless. What is important is that it describes a real-life scenario:

As I’m releasing packages I decided to use semantic versioning.

Semantic versioning allows the consumers of your binaries to assess the effort to upgrade to a newer version. Semantic versioning should not be used blindly for all kinds of projects. It makes a lot of sense for a NuGet package but it doesn’t for a product or an API for example.

In .NET we use four properties to handle versioning:

These two StackOverflow answers are great at explaining how to version an assembly.

Curiously enough the official documentation is sparse on the topic but this what I came up with after doing some reading:

AssemblyVersion can be defined as <major-version>.<minor-version>.<build-number>.<revision> where each of the four segment is a 16-bit unsigned number.

Developers tend to auto-increment this on each build. I prefer it linked to a commit / tag to be able to reproduce a build. I also use the same string for AssemblyInformationalVersion and AssemblyFileVersion (I’m a bad person I know).

I’ve implemented semantic versioning using GitVersion. I recommend using GitHub Flow when working on a simple package. In my experience Trunk Based Development tends to lead to lower code quality. Developers push early and often thinking they will fix it later but we all know than in software development later means never.

GitVersion produces an output that will allow you to handle even the trickiest situations:

In my case I’m using:

If you want to handle rebasing and Pull Requests you’ll have to use a more complex versioning strategy (keep in mind that GitHub advises against force-push in Pull Requests).

As an aside Cake allows you to set the AppVeyor build number.

I do not set the AppVeyor build number any more as GitHub Actions is pushing the NuGet packages and creating the tags and GitHub releases.

As the CircleCI build is running on Linux it doesn’t support testing against net461. Luckily the framework can be specified using an argument: --framework net6.0.

Again, the integration between Cake and AppVeyor shines in this area as Cake will automatically publish the test results for you (I wondered why I had duplicate test results until I RTFM).

AppVeyor displays all the tests but you must hover to see the framework used:

Failed tests come with a nice formatting and a StackTrace:

Azure DevOps has the most powerful tests results tab: 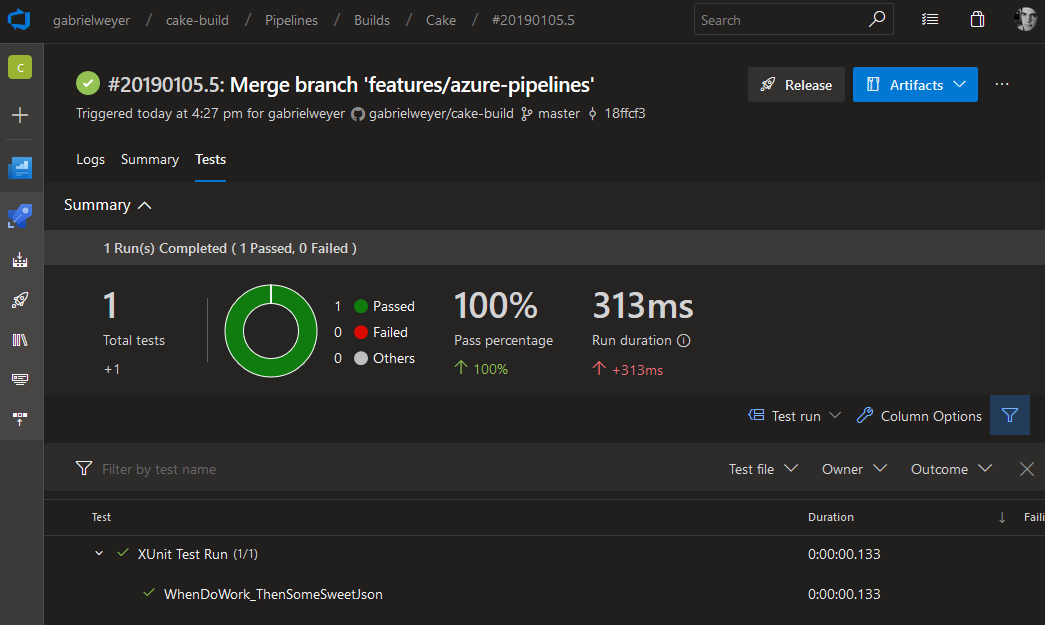 CircleCI has a few quirks when it comes to testing.

First it only supports the JUnit format so I had to use the JunitXml.TestLogger NuGet package to be able to publish the test results. Then you must place your test results within a folder named after the test framework you are using if you want CircleCI to identify your test framework.

When the tests run successfully CirceCI will only display the slowest test (you need to navigate to Test Insights to see it):

I don’t understand the use case, I would prefer the list of tests and timing and the ability to sort them client-side.

The output for failed tests is much better when using a JUnit logger instead of trying to convert the test results: 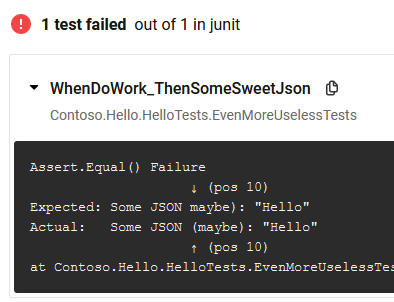 GitHub Actions do not support publishing test results! This is a pretty big shortcoming for a Continuous Integration system. A couple of third-party Actions are trying to fill the gap but if you’re multi-targeting or running your tests on multiple platforms expect additional complexity in you build script.

Visual Studio Test Results File (known colloquially as TRX) gave me the best output but the Trx Logger has limited abilities in terms of naming test results files. By default the test results file names do not include the assembly or the framework version. Using multi-targeting and the LogFileName parameter will result in test results files being overwritten by the last target. Using the recently introduced LogFilePrefix parameter doesn’t solve the issue, token expansion is not supported so you’ll have to rename the files to include the assembly name and remove the trailing numbers.

Ultimately I had to invoke dotnet test for each test project / framework combination. The end result is pretty neat: 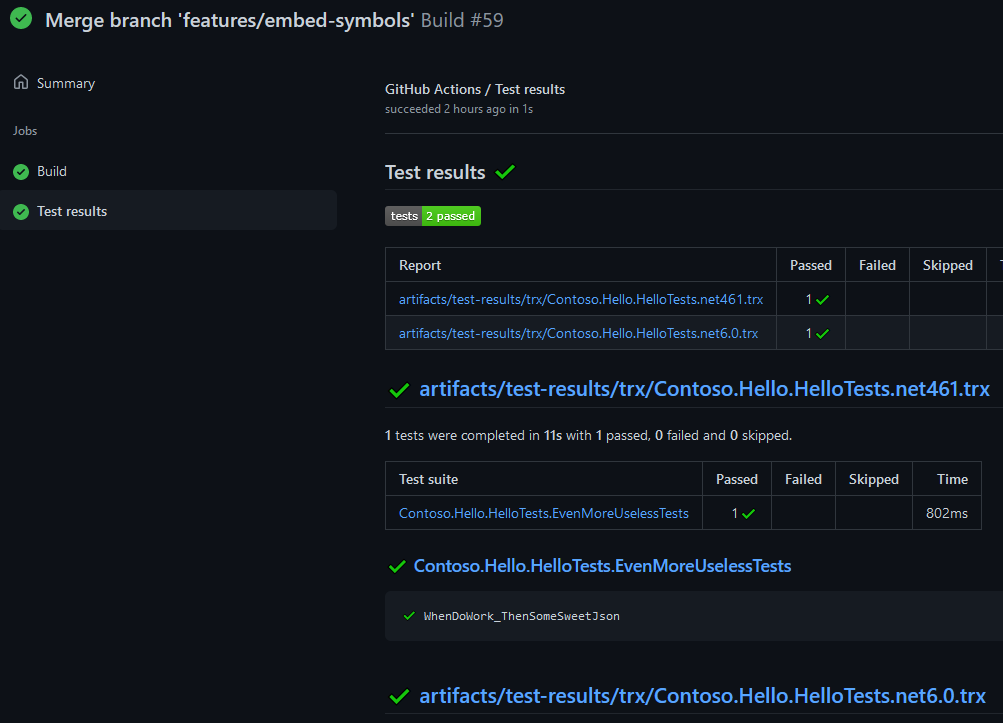 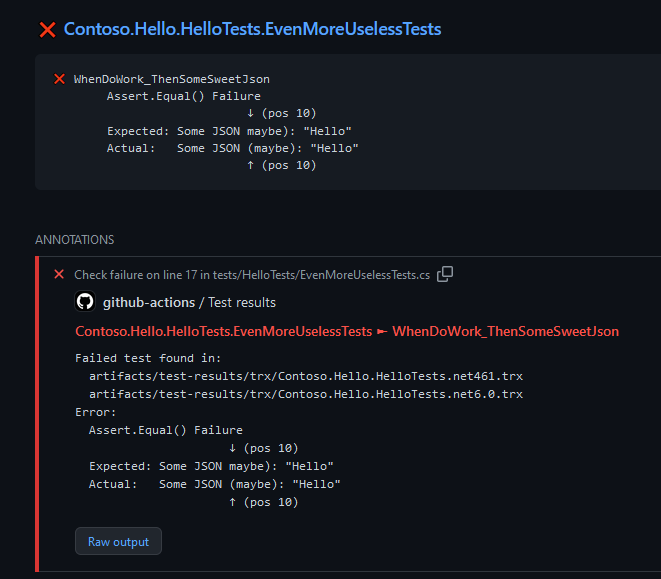 .NET is now leveraging the “new” *.csproj system and this means:

The references (projects and packages) and the package configuration are both contained in the *.csproj making it the single source of truth!

Referencing a project without turning it into a package reference

Sometimes you want to include a DLL in a NuGet package rather than add it as a package reference.

Luckily this issue provides a workaround. All the modifications will take place in SuperLogic.csproj.

The result is the following NuGet package: 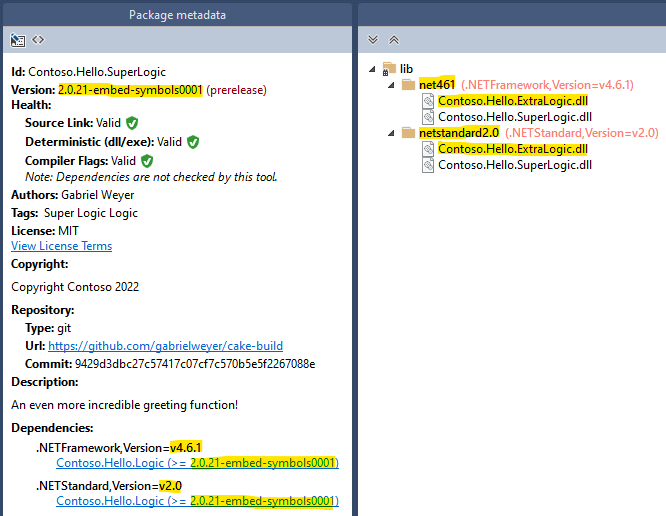 And the assemblies have been versioned as expected:

On any branches starting with features/, the NuGet packages will be published to a pre-release feed. If the branch is main it’ll be published to the production feed. This is handled by GitHub Actions in this section of the configuration.

By default the GitHub CLI does not use the workflow token, you have to explicitly provide it using an environment variable:

GitHub CLI relies on the shell expanding wildcards which doesn’t happen on Windows. So instead of providing:

Finally the GitHub CLI doesn’t allow to create a release without release notes in a non-interactive scenario. I worked around this by creating an empty file and providing it to the --notes-file parameter.

This is one possible workflow only. I’ve glossed over many details and taken some shortcuts (for example there is no support for Pull Request builds).

Those are the key takeaways: